It’s been a few years now since Borderlands 2 came screaming into my game library. Actually, it’s been more like six year s since the loud and brash shooter sequel made its acquaintance. And much like a new friend of a friend that you just met at a bar while getting drunk because you passed the bar exam, you have a few shots and look back on that night with a certain fondness. Fondness for your liquor, that is, not the new friend. More than likely, that new friend is now asking for money and showing up at your apartment at all hours of the night just to “hang.” But, I digress. Borderlands 2 is like that new friend except you don’t have to spend money for companionship. That is, unless you really feel like blowing your money for some decent distraction-type entertainment.

When the game was released, GI was in the throes of change and a new quarter. Change came in the form of me going it alone, since my previous partner who guided me around Pandora decided to head for parts unknown. I was on my own, but I was excited. I was ready to live life on Pandora with characters of my own and experiences shaped by my own actions without someone who knew the story by heart standing over my shoulder telling me that I was going about getting my murder on the wrong way.

Don’t get me wrong, I’m by no means a snob when it comes to killing things with help. I will never turn down an offer of joint killing when it comes to Borderlands, but I will be frank with you all: It sucks when you want to put your own brand of mayhem and death to the test and there’s someone who is literally sitting next to you going, “You should go here. You should change your class mod. You should use this gun. You should do this mission first.” Constantly. So much so that you learn the story before you even get started. Because they’re playing the game all day. Every day. You see my problem now? It was constantly in my face. So, I really didn’t get to enjoy the first game as much as I probably could have on my own. Of course, I probably wouldn’t have discovered it without that former partner so there’s that. But mostly, I was ready to rock on my own in the world, kind of like my real-life situation at the time.

GI was pulling out the stops on what we’d learned with the new game before its release. I wanted detailed coverage but I had to settle with what I could get in about three weeks of play. I bought the game as soon as I could, and I jumped right into the single-player campaign quickly. Now, I’m usually not in the habit of reviewing a game as soon as it comes out, mostly because I haven’t played enough of it to give you a good opinion. That’s why I leave the Now Playing hype machines to the experts like William Harrison. He’s on the ball when it comes to current games, and has the time to review things that the other writers don’t with the possible exception of Daniel Gibbs. But this time was different. We’d promised a review and we were going to deliver. And deliver we did.

I pulled my review goggles on and made a point to get down and dirty with the game. How did the second game handle the sequel transition? Was it worth coming back to Pandora for what was probably the ninth time (saying you did two playthroughs with all four characters of the first game)? Did Borderlands 2 live up to the hype and anticipation? Well, I’m still playing a year later, so it managed to do something right, I suppose. I’m usually not a fan of sequels — especially to awesome games — because I feel like it never works as good as the first time. But Borderlands 2, much like my drunk friend of a friend from the beginning, surprised me. It’s good company. I’m still learning things about the game well more than a year later, and I haven’t even touched the DLC or all of the characters.

Do I like it as much as the first game? No, and here’s why: It’s just not the same grittiness or stunning simplicity of Borderlands. Borderlands was frighteningly simple in its “killed or be killed” premise. The sequel, I feel, has some ulterior motive in its quest to get one over on me, the player. Yes, it’s funnier and a little more polished than the first. But, coming back to that new friend, it’s still asking me for money. For EVERYTHING. The first game had its DLC and costume stuff, but now there’s more monetization of everything in the game practically, and that’s not what Borderlands started out as. This isn’t to say I dislike Borderlands 2 for it, but there’s a limit of which I’m mindful when it comes to giving up maximum dollars for a game. Borderlands 2 is approaching it.

When I think back to the lead up to Borderlands 2, I’m reminded of the feeling I had in my heart of hearts. There was a sense of dread, that somehow the sequel wasn’t going to live up to the billing, and I’d be disappointed since I’d been waiting for at least a year for the game. I can tell you that I wasn’t disappointed. Afraid of change? Probably. But I don’t regret giving the game my attention and time. After all, as my XBox 360 beacon proclaims, it’s still a new day to ride or die on Pandora.

Lyndsey Beatty is editor-in-chief of Gaming Insurrection. She can be reached by email at editor@gaminginsurrection.com

Gaming Insurrection has gone in-depth in our adventures on Pandora! 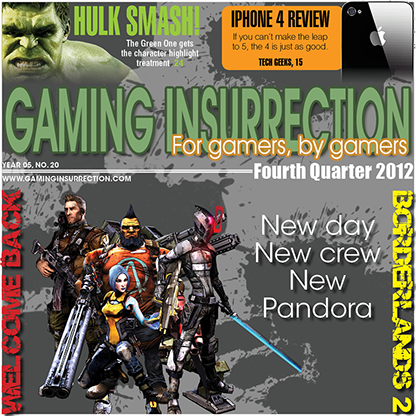 4Q2012 issue: We break down everything there is to offer in Borderlands 2. 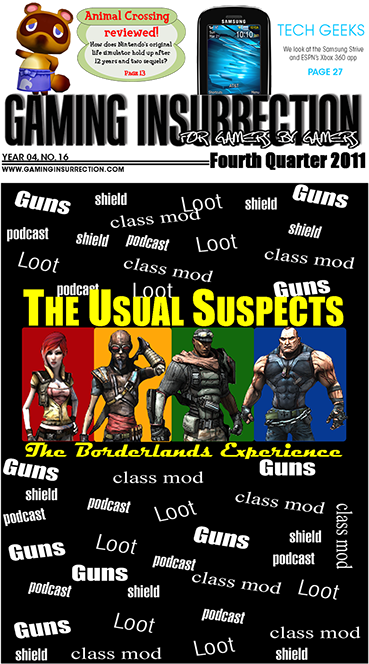 4Q2011 issue: GI looks at the shooter-looter favorite that began it all.