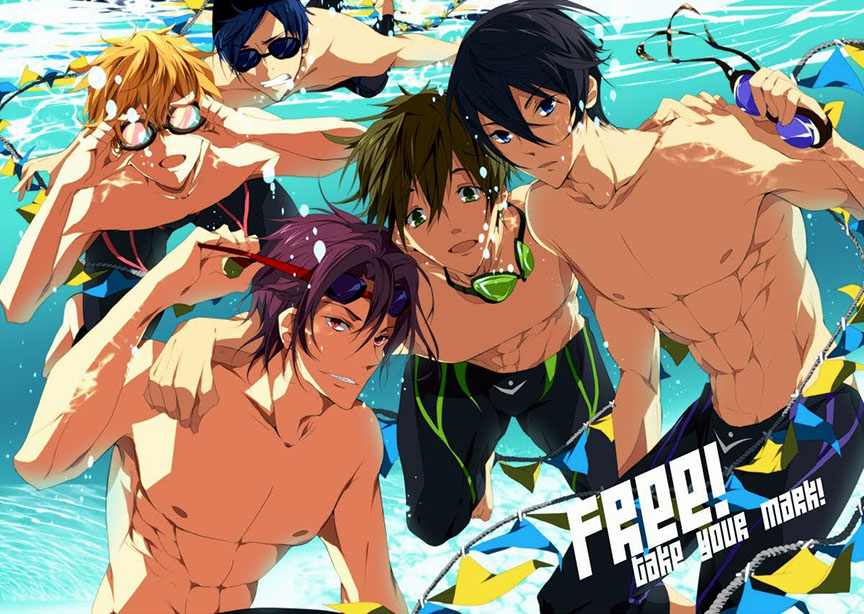 Premise: Three friends — Haruka, Nag­isa and Makoto — decide to begin a swim club after a fourth in their group, Rin, reap­pears in their lives after liv­ing abroad and rejects their offer to swim together again. The trio recruit another mem­ber, Rei, into their club and begin in earnest to res­ur­rect their old swim club and try to make it to Nationals.

Is it worth watch­ing?: Yes. It’s got com­pe­ti­tion and friend­ship, which is stan­dard for most anime these days. Also, if you’re into that sort of thing, the ani­ma­tion used in the mus­cles in this swim­ming anime is expertly drawn.

Break­out char­ac­ter: Rin Mat­suoka. Rin comes across as a pretty dark jerk, but he’s got his rea­sons for stay­ing away from the group. He’s inter­est­ing and he’s writ­ten well because of the real­is­tic way in which he comes back to his roots after a long absence. The strug­gle is there but the way he man­ages it makes it worth­while to keep watching.

Fun­ni­est episode: Episode 4, “Cap­tive But­ter­fly.” It’s all about teach­ing one of the club mem­bers to swim, which is kind of the point of hav­ing a swim club in the first place. We won’t reveal which mem­ber can’t swim, but the efforts to teach are what make the episode hilar­i­ous. Also, search­ing for the per­fect swim­suit in the episode also end in hilarity.

Where it’s going?: The Iwa­tobi High Swim Club trains hard to make it to Nation­als. Their efforts will not go in vain, we promise, and it remains to be seen if they can patch things up with their for­mer friend Rin. How they go about reach­ing these two goals is the best and bright­est part of acquaint­ing your­self with Free!